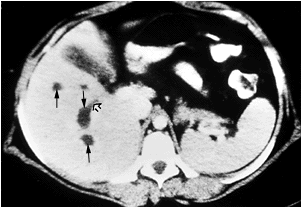 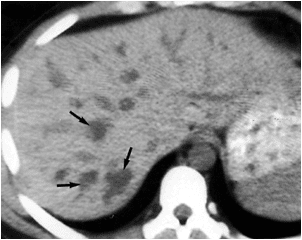 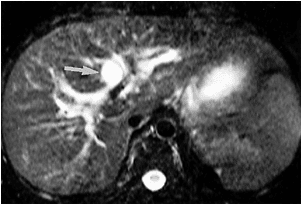 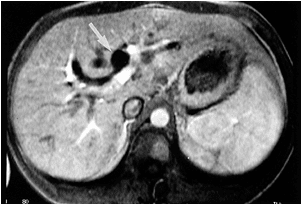 
The diagnosis now can be made with noninvasive imaging techniques including sonography, CT, and MRI. Cross-sectional imaging examinations show nonobstructive, saccular or beaded dilatation of the intrahepatic bile ducts. This is displayed as multiple, intrahepatic, rounded cystic spaces of varying sizes communicating with the branching, dilated, intrahepatic bile ducts .
One finding considered pathognomonic for Caroli disease is the central dot sign. This is characterized on unenhanced CT images by a small dot of slightly high attenuation in the dependent portion of the dilated bile duct. After the administration of intravenous contrast, these dots enhance intensely. The central dot sign is representative of portal venous radicles that are enveloped by, but not actually inside of, the markedly dilated bile ducts.
Reference:BiblioMed Textbook-Computed Body Tomography
Posted by Mohamed Elmasry at 11:48 AM